While staying in Oslo, I must – I thought – blog about the famous Norwegian author and playwrite Henrik Ibsen (1828-1906). Ibsen’s play A Doll’s House (Et dukkehjem), written, published and first performed in 1879 was, after all, a significant and relatively early expression for women’s liberation from the bourgeois domestic cage. I imagined that I would present Ibsen as an important spokesman in the struggle for women’s political and economic emancipation. His wife Suzannah Ibsen (1836–1914, née Daae Thoresen) has introduced him to the writings on John Stuart Mill (1806-1873) on women’s rights.

When Ibsen wrote his play, it was considered scandalous. Debates ensued. It was hardly acceptable to Ibsen’s contemporaries that Nora Helmer, the protagonist of A Doll’s House, quitted her home, her husband and her three small children. At the end of the play, Nora, an unfulfilled middle-class housewife and mother, denied that her life with her husband was a true marriage, while she continued by declaring that her husband was a stranger to her and her small children were better off without her. When the front door slammed after her, walking out on her family after her final “Farvel”, many people in the audience must have shuddered with shock. 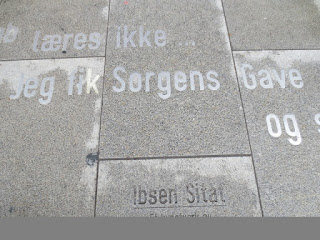 In 1889, a decade later, Clement Scott, the critic of the Daily Telegraph, commended the acting and observed that “[t]he interest [of the audience] was so intense last night that a pin might have been heard to drop.” However, he observed: “But at the present moment we have no time or opportunity to discuss Ibsen or his theories, which we might do at great length. We do not honestly believe that those theories as expressed in ‘The Doll’s House’ would ever find favour with the great body of English playgoers.”

In fact, Ibsen himself thought it necessary to write an alternative version of the play when his translator and agent informed him that there was a risk that his play would be tampered with in Germany and that the North-German theaters especially would prefer a different ending. In the alternative version, Nora’s husband showed her their sleeping children when she was leaving. At the end, she was unable to make them motherless by quitting the house and them.

Moreover, I had planned to tell how Ibsen had modeled the plot of A Doll’s House and Nora Helmer on a real-life incident involving Laura Kieler (née Petersen, 1849-1932), a family friend of the Ibsens. Laura Kieler had taken a loan in order to finance her family’s trip to Southern Europe after her husband had contracted tuberculosis and the doctors had recommended a warmer climate. Unable to raise the money to pay the debt, desperate, pregnant and unwell, Laura Kieler had forged a document in order to get out of the predicament.

Unlike Torvald Helmer who threatened his wife Nora with having the upbringing of their children taken away from her and the reduction of their union to a mere façade, Victor Kieler took his wife Laura to court in order to have sole custody of the his children – also the newborn – and a legal separation. Laura Kieler was labelled an unfit mother. In addition, she was sent to a mental asylum for a month. Only two years later did her husband relent and accept to take her back so that she could again live with her children.

So, this was the original plan for the blog. But it did not turn out that way. As I was about to visit the Ibsen Museum (Henrik Ibsens gate 26) in Oslo with my uncle, I read more about the life of this famous author. Then I discovered that I had to abandon my original idea of focus on A Doll’s House and Ibsen’s role in women’s lib.

Instead, I realized that I would have blog about another, less exemplary aspect of Henrik Ibsen himself. Namely, Ibsen as the father of an illegitimate son who is not mentioned in his official entry in the Norsk biografisk leksikon alongside with Sigurd Ibsen (1859–1930), Ibsen’s legitimate son. (Obviously, the place of illegitimate children is not among the legitimate children in biographical encyclopedia articles even if they were acknowledged as Ibsen’s was.) 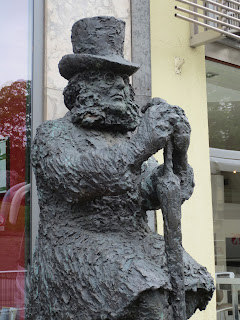 When Henrik Ibsen was a mere impoverished youth and working as an apprentice pharmacist in the household of the chemist Reimann in Grimstad since 1844, on 9 October 1846, Reimann’s maid gave birth to a son who was baptized Hans Jacob Henrichssen Birkedalen. The baby’s mother Else Sophie Jensdatter (1818-1892) named Ibsen as the father, and this was duly recorded at the baptism.
The alleged father could deny paternity if he wished to escape the imposition of child maintenance payments until the child’s fifteenth year by the officials. In his reply, Henrik Ibsen observed that he could not “categorically deny responsibility of the infant” as he had “regrettably” had intimacies with the ten-year older Else Sophie Jensdatter. However, Ibsen observed that she had also “kept company with other young gentlemen” at the time. Moreover, he considered that their being in the same household and “her tempting deportment” had caused his moral lapse.

So, the older temptress had thrown herself on top of the young and innocent, but good-looking and ambitious lad in the scenario of young Ibsen. Indeed, this has been one of the most common clichés used for illegitimate mothers.

At first, Ibsen made the maintenance payments regularly, but later he fell into arrears. He had financial difficulties, but he was also pursuing other love interests. In 1850, Ibsen’s failure to pay child maintenance on time lead to his being threatened by the officials with forced labour in the Fortress of Akershus in Oslo. This was averted, but Ibsen had maintenance arrears many times over the years, especially after his own marriage in 1858 until the final payment in 1862 released Ibsen from the maintenance obligation.

Per Kristian Heggelund Dahl has observed about Ibsen’s “reserved indifference” towards the economic plight of Else Sophie Jensdatter and his son Hans Jacob Henrichssen that “[t]he cleft that separates [Ibsen] from mother and child is deep. He doubts the paternity imposed on him […].” Indeed, Ibsen may never even have seen his illegitimate son, whom he apparently considered a dark and shameful secret of his unhappy early life.

Henrik Ibsen and his family left for Germany and Italy in 1864, and they lived abroad for more than two decades. Thus, Ibsen’s rising star took him to European fame and fortune, while his former lover’s prospects spiraled down as a labourer who died pauperized and living on charity. While Ibsen’s legitimate son Sigurd Ibsen (1859–1930) became prime minister and doctor of laws, Hans Jacob Henrichssen became a blacksmith with a fondness for reading, alcohol and fiddles. He had several children, including one illegitimate daughter, and he also died a pauper in 1916. While Ibsen’s legitimate son rose to the elite of the new nation, the bastard son was plunged into obscurity, manual labour and the workhouse. 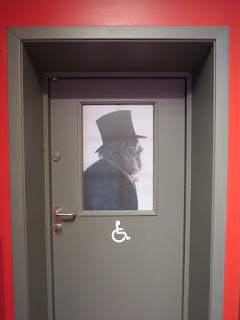 Nevertheless, it is worth remembering that this year Norway celebrates the centenary of the so-called “Castberg’s laws on children” (De Castbergske barnelover), named after the politician Johan Castberg (1862-1926), one of the most active spokesmen of the reform. The six laws were very progressive in their time, giving illegitimate children, e.g., equal inheritance rights after both parents and a right to the paternal name. Despite being criticized for undermining Christian family values and promoting promiscuity, the laws were accepted on 10 April 1915.

The “Castberg’s laws on children” were too late to make a difference in Else Sophie Jensdatter’s or Hans Jacob Henrichssen’s lives, but they certainly improved the fortunes and prospects of many other Norwegian illegitimate children. They came to mark an important milestone in making all children equal regardless of their parents’ marital status. The centenary of “Castberg’s laws on children” is well worth celebrating – especially bearing in mind that similar reforms were made in Finland only in the 1970s, more than half a century later.

Promote your Page too